Euro Surges to Highest Since January 2015 After Draghi Speech

Posted by J. Athens Financial Market News on August 26, 2017
The euro rallied to its highest since January 2015 as European Central Bank President Mario Draghi took a pass on talking down the common currency in remarks at the Jackson Hole economic symposium, clearing the way for bulls to keep buying.
The Bloomberg Dollar Spot index dropped to its lowest since January 2015 after Draghi’s remarks, before mildly paring losses. The greenback was lower versus all of its G-10 peers and Treasury yields were generally down on the day, after Federal Reserve Chair Janet Yellen also avoided discussion of monetary policy in an earlier speech. The afternoon Draghi speech and morning Yellen remarks would have disappointed any traders looking for the ECB chief to push back on gains by the euro or for the Fed chair to underscore the potential for another rate hike this year. 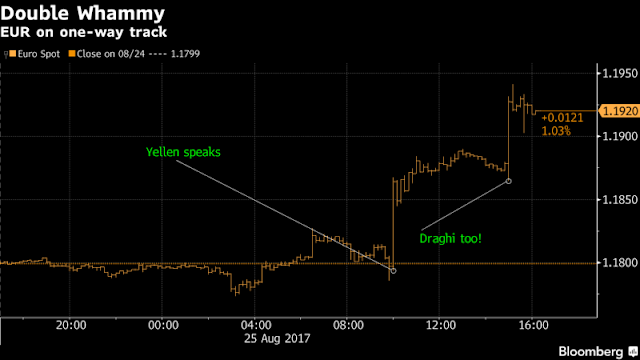