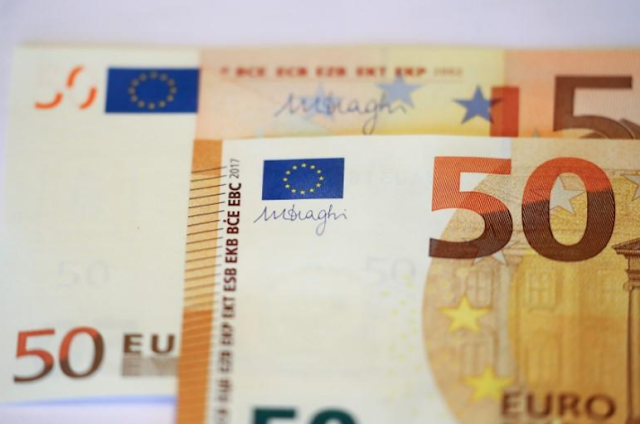 The euro jumped more than half a percent after breaking above a key level on Tuesday while the dollar fell to a two-year low against the Swiss franc after a North Korean missile test sapped investors’ leveraged demand for risky assets.
With markets grasping at the lack of any mention of the euro’s strength by ECB President Mario Draghi at the Jackson Hole conference in Wyoming last week as a tacit green signal for euro bulls, traders pushed the single currency above the $1.20 line.
Still, some analysts were wary that the single currency’s renewed strength would attract some attention from the European Central Bank at a policy meeting next week.
“I think the fact that Draghi refrained from talking about the euro at Jackson Hole, opened the door for the market to test the level and the risk-off mood overnight gave it the final push,” said Martin van Vliet, senior rates strategist at ING.
“Next week, I think Draghi will definitely touch upon the exchange rate if it’s still at $1.20.”
The euro extended gains to be up 0.6 percent on the day to $1.2052 against the dollar after breaking above the $1.20 line in early trades. It has gained nearly 2 percent so far this month and is up more than 14 percent this year.
Helping the euro’s rise has been a general sell-off in the dollar against its major rivals.
A trade-weighted index fell 0.6 percent to its lowest levels since January 2015 with benchmark 10-year U.S. Treasury yields down 6 basis points to 2.09 percent. [US/]
“Risk sentiment has taken a beating on the North Korea jitters and weak equity markets with the only exception being the euro, as the uptrend momentum seems to be behind the single currency,” said Stephen Gallo, European Head of FX Strategy at BMO Financial Group in London.
North Korea fired a missile early on Tuesday that flew over Japan and landed in Pacific waters off the northern Japanese region of Hokkaido in a sharp escalation of tensions on the Korean peninsula.
Stock markets across the region were a sea of red with U.S. stock index futures pointing down 0.8 percent while the Swiss franc and the Japanese yen rose more than 1 percent and 0.8 percent respectively against the dollar. [MKTS/GLOB]
The franc rose to as high as 0.9428 per dollar, its strongest since August 2015.
Financial markets are fretting about the fiscal situation in Washington - deadlines loom in late September and early October on the U.S. budget and the federal debt ceiling.
President Donald Trump stoked anxieties by threatening on Aug. 22 to shut down the government if Congress does not fund his proposed U.S.-Mexico border wall.
“The U.S. outlook is looking difficult with the concerns around the budget and a looming shutdown,” said Esther Maria Reichelt, an FX strategist at Commerzbank in Frankfurt.
Against sterling, the euro skipped to its highest level since October 2016 at 93.07 pence.