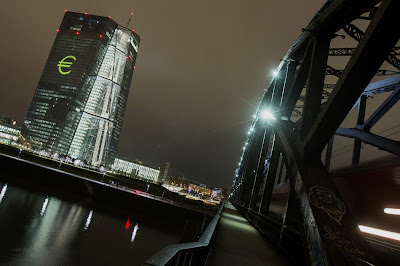 European Central Bank policy maker Ardo Hansson said he isn’t currently concerned about the strength of the euro as officials prepare to discuss how to wind down their bond-purchase program.

The currency’s 12 percent gain against the dollar this year is largely a reflection of the region’s economic momentum, the Estonian central bank governor said in an interview in his office in Tallinn on Wednesday. The focus should instead be on crafting a policy message for the path of stimulus in 2018.
“We’ve been moving in a corridor where I don’t think it’s a big change,” Hansson said. “It’s not surprising that markets might react and say, on balance, we’re more upbeat about Europe than we were a while ago, which will cause the currency to be a bit stronger.”
ECB officials returning from their summer breaks are set to discuss the future of their stimulus program at their Sept. 7 meeting in Frankfurt. While growth in the 19-nation economy is gathering steam, inflation is still stuck below the goal of just under 2 percent.
Hansson’s relaxed tone on the single currency comes after the account of the last ECB policy meeting in July showed some officials were concerned that the euro could appreciate more than justified by the strength of the economy and stymie the recovery. That’s put investors on guard for any signals that the central bank will attempt to rein in the euro.

ECB President Mario Draghi didn’t touch on the topic when he spoke at a conference in southern Germany on Wednesday. He’ll address the Federal Reserve’s symposium on Friday in Jackson Hole, Wyoming, where he’ll join his U.S. counterpart Janet Yellen and others in discussing how to foster dynamic growth.
Hansson, 59, was born in Chicago and holds a PhD in economics from Harvard University. He served with the World Bank in eastern Europe for a decade, becoming the institution’s chief of economic policy in China in 2008, and joined the Estonian central bank in June 2012.
He and his colleagues on the Governing Council have pledged that the ECB will buy 60 billion euros ($70 billion) of assets a month until at least the end of this year. Draghi said in July that the ECB will start debating next year’s plan in the fall, but declined to say whether any decisions will be taken in September or delayed until later. Hansson said not everything has to be decided at once.
“If you split the degree of accommodation issue from how you deliver it, you can have a sequenced conversation there,” he said. “Let’s first agree where we’re headed broadly and then let’s dig into relative effectiveness of various solutions.”

The ECB’s current forward guidance states that the central bank stands ready to rev up its bond-buying program if the outlook for inflation becomes less favorable. While the bank dropped a reference to lowering interest rates further in June, Hansson said it can still keep its easing bias without focusing too much on asset purchases.

While stating that he doesn’t yet have a view on how the stimulus package should be designed after 2017, he noted that other measures available include the negative interest rate on deposits, reinvestments of proceeds from maturing bonds as well as long-term loans to banks. The composition of bond purchases can matter more than their size, and the bank could choose to buy more corporate debt, he said.
“There are two things here: one is an easing bias and the other is a bias in favor of a particular instrument,” said Hansson, “Maybe we want an easing bias, but we will deliver it in somewhat different combination. We are not going to tie ourselves to a particular instrument, but leave more flexibility to how we technically deliver that degree of accommodation.”

Hansson acknowledged that such a shift could be challenging for the central bank’s communication, but said it would give the central bank more leeway to consider various options of calibrating its policy. He put himself firmly in favor of retaining limits of the asset-purchase program that forbid the ECB from buying more than 33 percent of government bonds from one issue or issuer.
“Some things may be more binding than other,” he said. “but to me, issue and issuer limit are more important than other things we set as constraints in the past.”
On the topic of low inflation, he said that issues such as digitization and globalization of supply chains may have temporarily distorted the Phillips curve -- the relationship between low joblessness and higher wages and prices -- but that old economic paradigms should eventually reassert themselves.
“Let’s be a bit more patient and let’s believe that inflation is in the pipeline, it’s just going to take us a bit more time,” Hansson said. “It will come eventually, have faith that these relationships exist.”