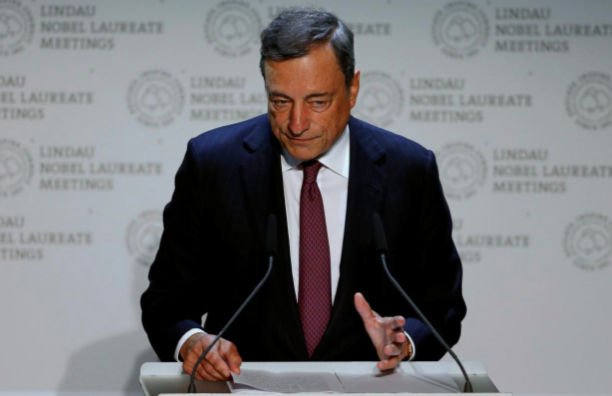 The European Central Bank’s ultra-easy monetary policy is working and the euro zone’s economic recovery has taken hold even if more time is needed to lift inflation to the bank’s 2 percent target, ECB President Mario Draghi said on Friday.
Speaking at the U.S. Federal Reserve’s annual conference in Jackson Hole, Wyoming, Draghi said he was confident inflation would eventually reach the target as output rises and the labor market tightens, though he urged patience on that front.
While ECB stimulus has pushed euro zone growth to over 2 percent, the fastest since 2011, inflation is expected to undershoot the bank’s target at least through 2019, a dilemma for its policymakers who, unlike those at the Fed, only have an inflation mandate.
“On one hand we are confident that as the output gap closes inflation will continue converging to its objective over the medium term,” Draghi said in response to a question after his speech. “On the other hand, we have to be very patient because the labor market factors and the low productivity are not factors that are going to disappear anytime soon.”
ECB policymakers are running out of time to resolve this dilemma as they have agreed to decide this autumn whether to extend or wind down the bank’s 2.3 trillion euro ($2.7 billion) asset purchase program, which is due to expire in December.

“We have not seen yet the self-sustained convergence of inflation to the medium-term objective,” Draghi said. “Therefore a significant degree of monetary accommodation is still warranted,” he added, repeating the bank’s longstanding line on stimulus.