Posted by J. Athens Financial Market News on August 24, 2017
This week’s gathering of central bankers in Jackson Hole presents policy makers a chance to talk down their currencies after months of gains versus the dollar. They can’t all win.
That’s because traders in foreign exchange -- the world’s biggest financial market -- are gearing up for reduced stimulus in the coming months in some major economies. Against that backdrop, there’s little that officials can do to lean against currency strength, barring intervention or forgoing tighter monetary policy altogether. 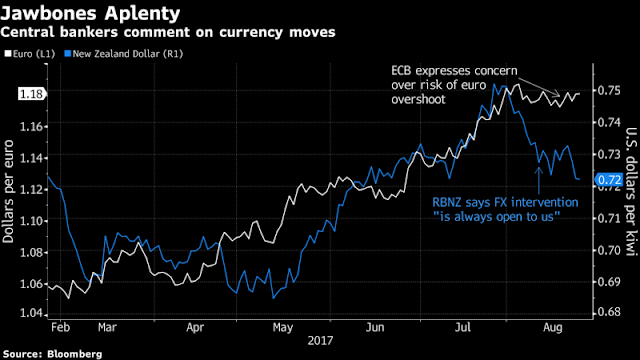 “People are not going to take them seriously,” Steven Englander, head of research and strategy at Rafiki Capital in New York. “Saying we don’t like the strong exchange rate -- that’s for free. You don’t have to like it, the market cares whether you’re going to do something about it.”
Here are some currencies for which the underpinnings are so strong that they’re poised to rally even if policy makers push back against gains at the Wyoming powwow or in the months ahead:

Investors are awaiting clues on monetary policy from European Central Bank President Mario Draghi, who’s due to speak Friday at the Federal Reserve Bank of Kansas City’s symposium. The euro has rallied 12 percent this year to about $1.18 on Thursday amid a brightening economic outlook and ebbing political anxiety.

ECB officials have voiced concern about the risk of currency strength, which hampers efforts to revive inflation. Yet traders still expect the central bank to announce the scaling back of its 2.3 trillion-euro ($2.7 trillion) bond-buying program in September or October, so jawboning the currency lower would have limited long-term impact, said Charles Zerah, a money manager at Carmignac Gestion SA.
The options market shows euro bulls are ascendant: Risk reversals for the shared currency show demand is the highest in two weeks for options betting on gains above $1.20 in the next three months.

Reserve Bank of Australia Governor Philip Lowe said this month that the Aussie’s appreciation has eroded exporters’ competitiveness and is weighing on the outlook for domestic output and employment. The currency has rallied almost 10 percent against its U.S. counterpart this year to about 79 U.S. cents, propelled by climbing iron ore prices and recovering demand from China.
The RBA is unlikely to lean too heavily against the currency’s strength until it surpasses 80 cents, said Brad Bechtel, a currency strategist at Jefferies LLC.
“It’s showing up on their radar, and they’re starting to jawbone a little bit,” he said. The link with iron ore “tells me that Aussie dollar could catch up some more."

New Zealand may be quicker to act, which is giving traders pause. Reserve Bank of New Zealand Governor Graeme Wheeler surprised markets this month by telling a parliamentary committee that currency intervention “is always open to us.” His comments came after the currency reached a two-year high of 75.58 U.S. cents in late July.
The kiwi has settled around 72 U.S. cents, but the RBNZ would likely prefer to see it closer to 70 cents, said Mark McCormick, North American head of foreign-exchange strategy at Toronto-Dominion Bank.
“The market’s taken them at face value, not only because they suggested intervention, but because they pushed back on rate hikes,” said McCormick. “I think they’d be happy with it coming down a bit more.”
The RBNZ last intervened in 2014, when it sold New Zealand dollars to curb kiwi strength.

While Sweden’s currency is up 13 percent against the greenback this year, Knut Hallberg, an analyst at Swedbank AB, said he doesn’t expect Riksbank Governor Stefan Ingves to remark on the currency at Jackson Hole.
First Deputy Governor Kerstin af Jochnick, who was given a mandate last year to intervene in the currency market, referenced the krona in a speech Thursday, saying the currency has been strong and the Riksbank is assessing what that means for monetary policy.
“We do expect a stronger Swedish krona ahead, but it’s a balancing act for the Riksbank between rising inflation and the risk for a too-strong krona dragging down the inflation outlook,” said Magne Ostnor, a strategist at DNB Bank ASA.