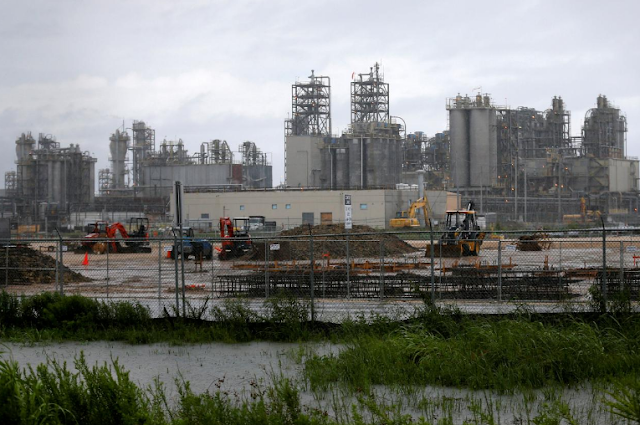 (J. Athens) - Oil prices slid on Wednesday but gasoline spiked to their highest since July 2015 as flooding and storm damage in the wake of Hurricane Harvey has shut one-fifth of U.S. oil refineries, crimping demand for crude but raising fears of a fuel shortage.
U.S. West Texas Intermediate (WTI) crude futures CLc1 were at $46.30 per barrel at 0359 GMT (11.59 p.m. ET), down 14 cents from their last close. Brent crude futures LCOc1 were down 20cents, at $51.80 a barrel.
In the refined product market, price movements are more dramatic. U.S. gasoline prices RBc1 were 3.2 percent higher at $1.8391 per gallon on Wednesday. Prices earlier climbed to the most since July 31, 2015, at $1.842.
Ultra-low sulfur diesel futures also gained 1.2 percent to $1.6854 a barrel and were earlier at their highest since Jan. 9 at $1.697.
“With fully 20 percent of the U.S. refining capacity offline, attention has been focused on potential shortages in refined products, with gasoline futures rocketing another four percent higher overnight,” said Jeffrey Halley, senior market analyst at futures brokerage OANDA.
“Severe flooding due to tropical storm Harvey is affecting refinery capacity and therefore crude demand,” ANZ bank said in a note.
The largest crude oil refinery in the United States, Motiva Enterprises’ [MOTIV.UL] 603,000 barrel-per-day (bpd) Port Arthur, Texas, plant, was shutting down on Tuesday night because of flooding from Harvey, according to people familiar with the operations.
Preparing for more rain and floods, Total (TOTF.PA) cut production to 53 percent of capacity at its 225,500 bpd refinery, also in Port Arthur, market sources said.
Hurricane Harvey hit the U.S. Gulf coast last Friday. While it has been downgraded to a tropical storm, ongoing torrential rains have flooded numerous refineries in Texas and Louisiana, the heart of the American petroleum industry.
At least 3.6 million bpd of refining capacity are offline in Texas and Louisiana, or nearly 20 percent of total U.S. capacity, based on company reports and Reuters estimates.
Restarting plants even under the best conditions can take a week or more, refiners said.
Beyond the impact of Harvey, the American Petroleum Institute (API) said late on Tuesday that U.S. crude inventories fell by 5.780 million barrels last week, an indicator that the U.S. oil market is gradually tightening.
The figures, however, do not reflect the impact from Harvey. Government data for last week is due to be published by the Energy Information Administration (EIA) later on Wednesday.
Traders said that even the EIA data would take weeks to fully reflect the impact of the storm and floods.