After the flood, Fed likely to see little change in economy, policy course 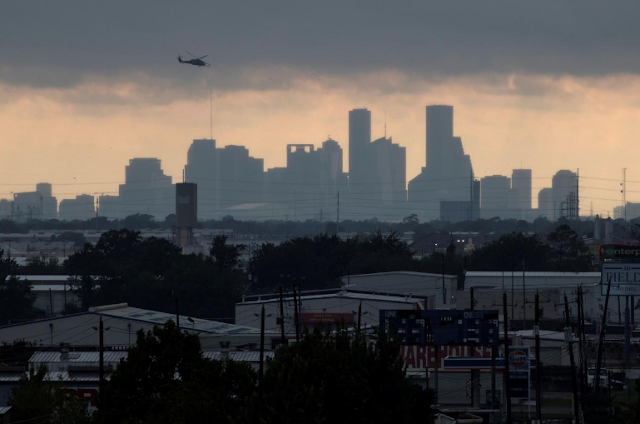 Sunlight breaks through storm clouds as a helicopter hovers above the Houston skyline.

The economic fallout from Hurricane Harvey will make the Federal Reserve’s job more difficult when it meets in three weeks, but U.S. central bankers have looked past major storms before with little change in monetary policy and are likely to do the same this time.
In the weeks after Hurricane Katrina battered New Orleans in August 2005, the Fed confronted what staffers deemed “a thick data fog” that included short-term hits to employment and output, and concern that growth would suffer while inflation jumped because of damage to Louisiana’s energy sector.
The Fed nevertheless continued raising rates and never looked back, according to transcripts of the post-Katrina meetings. Those included a warning from then-San Francisco Fed president and now Fed chair Janet Yellen that changing policy because of the storm “could counterproductively mislead market participants” about the Fed’s direction.
Superstorm Sandy seven years later passed with barely a mention in the Fed minutes of the day.
Natural disasters can have serious local impacts, devastating families and communities, changing investment and migration patterns over time, and causing some businesses to fail in the moment while others thrive during the rebuild.
But economists generally agree that the long-term national impact of such events is modest, with short-term costs and disruptions offset - and sometimes more than that - by the boost in spending that comes during reconstruction and the surge of investment to replace damaged building and equipment.
“This unfortunate event will not likely affect the overall trajectory of the economy or monetary policy,” Deutsche Bank economists Brett Ryan and Matthew Luzzetti said in a report. “In turn, Fed officials will likely look through some of the potential near-term volatility in the growth data.”
In the short-term, the United States can expect an uptick in jobless claims and perhaps slower-than-expected employment growth; muted retail sales outside of gasoline as fuel prices rise; and a drop in industrial production with between 17 percent and 27 percent of U.S. fuel refining capacity offline as of Tuesday, and major ports closed.
Like the seasonal patterns that commonly affect economic data, a drop in one period gets made up later as federal aid and insurance checks start to flow, and businesses and households rebuild or relocate.
“As a general rule, hurricanes tend to be a short-run depressant and a medium-run boost to economic activity,” JP Morgan economists Michael Feroli and Daniel Silver wrote in an analysis of the storm’s likely impact.
Economists at Goldman Sachs put the initial property damage estimates at $30 billion, still in the top 10 of storms since World War Two, the firm said, but far short of the roughly $150 billion tab for Katrina.
Though refineries and other facilities may be off line temporarily, Tulane University Professor Eric Smith noted that the wind velocities during Harvey were below the levels that coastal energy facilities are designed to withstand.
Sensitivity to flood risk after Katrina, he said, led energy companies to elevate some pieces of equipment like pumps on scaffolds so they would not suffer permanent water damage and be back on line that much faster.